On the 11th and 12th of February 2022, we invite you to join our campaign by sharing your stories as women researchers, focusing on what did inspire you them to pursue your career.

The campaign is based on 3 inspiring questions, that are meant to be answered shortly to fit in the poster:
1. What is your professional background?
2. What did inspire you to pursue this career?
3. Who was your role model?

Download the editable Response template [power point format] and share it on social media. You are more than welcome to include photos in your posters. Don’t forget to use our hashtags #DreamItBeIt and #EUSisterProjects and tag us!

Gender-sensitive communication on social media, in practice: a pilot experience at UNICA

By Manuela Aru and Alessandro Lovari, University of Cagliari

“A challenging, but definitely inspiring and stimulating experience. Every step of the process was fundamental: from the study of the materials to the design of every single part of the communication campaign”.

With these words, a student of the course of Public Sector Communication at the University of Cagliari described the experience in which she has been involved with other 19 students in January-February 2021: a role-play activity in which the students had to act like a real communication agency, with the goal to design communication campaigns on Instagram, following the principles of gender-sensitive communication.

The initiative, designed and developed by Alessandro Lovari, Manuela Aru and Maria Antonietta Tolu (Department of Political and Social Sciences), has been promoted with the aim to foster the mainstreaming of a gender-equality culture within the students community and to put in practice the concepts highlighted by the gender-sensitive guidelines developed in SUPERA. In UNICA, the gender equality plan (GEP) can be conceived as an open laboratory, that may host pilot activities directly involving the different parts of the university community.

While the general goal of this pilot initiative was the engagement of the student’s community on the topics of equality and inclusion in academia, one of the specific objectives was to guide the students among the four steps of the design and implementation of an institutional social media communication campaign:
1) research and analysis of the context and the target groups;
2) remote brainstorming sessions to understand and analyse the proposed topics and key messages;
3) design and creation of gender-sensitive graphics and texts;
4) publication of the contents on Instagram, following an editorial calendar.

The final results can be described as effective, impactful and surprising, especially in terms of visual identity (the way you shape perception and create an impression through the values communicated by the graphics), tone of voice (the way students have decided to communicate the messages) and coherence between the general strategy and the objectives.

Effective – Although free of a previous knowledge or experience in the field of gender-sensitive communication, the students managed to adopt a perspective free of unconscious biases.

How shall we represent the impact of gender stereotypes on academic career? “No common metaphors: let’s pick the image of the domino effect”

What visual images can we use to describe the gender inequalities? “Not only ladders: what about depicting two funambulists linked each other by a rope, or two people together on a swing?”

A wide range of original representations have been chosen, from comic strips to statistics and graphs: an innovative and effective way to understand and describe gender-related issues to the wider public of the University community.

Impactful – One of the most relevant outcomes one could highlight is the care devoted by the students to inclusion and gender-sensitivity both on texts and visuals. The thing that mainly drew our attention and curiosity has been the great variety of the visuals used to depict the different moments of the academic life. Books as big as houses, people with blue skin, paths made of words, non-binary people with rainbow hair: an impactful representation of the concept of inclusion.

Surprising – The use of Instagram could be considered an ordinary, daily and common task by 19-24 years old students; but it may still provide an effective way to get these students feel free to express their imagination and creativity. Indeed, Instagram includes text, video and pictures, with the possibility to create engagement with polls, question’s boxes, Stories and live streaming.

The most surprising detail concerns the capacity – and the courage – of the students to put themselves out there to create contents, express an opinion and talk about difficult topics such as gender-based violence, sexual harassment and mobbing with empathy and care. They created contents using the most powerful Instagram tools as the Stories (contents that disappear after 24 hours), the IGTV (longer videos used to create more compelling contents) and Reels (a new instrument to record and edit 15-seconds videos with music and effects). They always kept their language clear, as required by a public sector organisation, and respectful of all the differences and needs, in the effort to adopt an intersectional perspective.

It is important to highlight that the use of this uncommon approach by the students required an intense preliminary study: indeed, the first step of this project, according to the goals of the course, was the study of the key concepts of public sector communication and gender communication, and the analysis of different communication campaigns on gender topics released in Italy and Europe in the last few years. This preliminary work aimed at developing the ability to distinguish good and bad communication practices in the development of a campaign.

The study of the SUPERA communication plan provided a structure to the work projects: each group chose six of the SUPERA key messages – targeting the students communities – and developed six Instagram posts, with original graphics and captions. The analysis of the gender-sensitive communication guidelines produced by SUPERA has also been essential to guide the students through the values and the standards of gender-sensitive communication.

Each project was presented via Zoom to a committee of researchers and professionals in the fields of public and gender-sensitive communication who expressed its opinions and points of view on each work group, creating an inspiring moment of exchange and knowledge sharing. The committee was composed by a representation of the SUPERA team at UNICA and by a specialist in the public sector communication field, Franca Faccioli, Professor at the University of Rome – Sapienza.

We can definitely say it: the students of UNICA won this challenge! Great job! 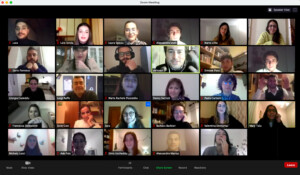 Manuela Aru2022-05-27T09:48:59+02:00March 12th, 2021|Tags: academia, awareness campaign, gender-sensitive communication, RPOs, social media campaign, training, UNICA, university|
SUPERA website uses cookies to gather information necessary for browsing the website and improving the navigation experience, in accordance with our Privacy Policy. By clicking on any link in the web pages you are giving your consent for the use of cookies. Ok